This is not a man I want poking my cows. 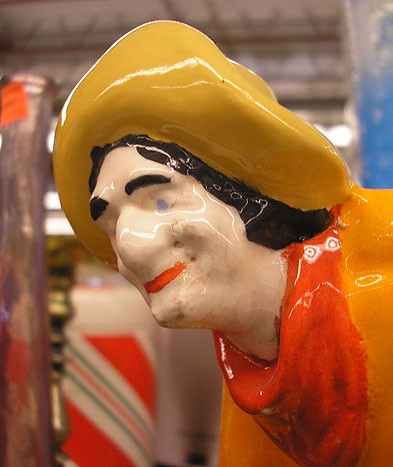 He’s like Jonah Hex’s somewhat special half-brother, the tall, creepy one. The one with a shirt with buttons like a string of hog nipples, dead-pale skin, greasy black hair–I don’t know, maybe he’s from an all-cowboy version of “Rocky Horror Picture Show” and I shouldn’t judge, but he just looks like the sort of person you wouldn’t trust with my livestock. He’s got plans.And staring, dead eyes. I don’t even know what’s going on with that weird facial scar. It’s not the sort of scar that impressionable young people would dig. It’s more of a “thrown into the local acid distillery by the sheriff after he threatened the schoolmarm” scar. This is not at ALL improved by the shapeless lump of a nose. I think Voldemort had a better stately profile.

Maybe he’s a supervillian? Like the Joker, but in chaps? The Rustler, perhaps? 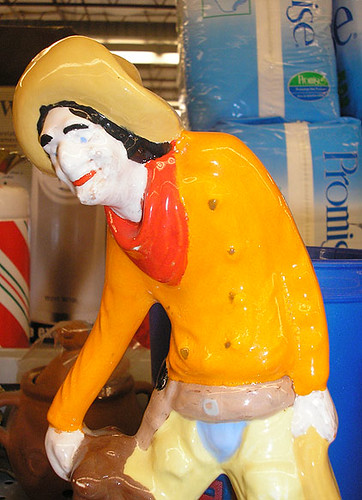 The hog-nipple shirt–I’m sure it’s de rigueur for all the dudes at the ranch, but it really appears–and I’m not at all comfortable with this–that they’re not just buttons. That each one actually sits on a fleshy little mound. Maaaybe this guy was really meant to be “home on the range,” he’d probably weird out the townsfolk, scare the horses, you know. “See Wyatt, the amazing Pig-chested Cowboy! Part Pig! Part Cow! Part Boy! Don’t be afraid of him folks, he’s only dangerous if he’s got a banana.” 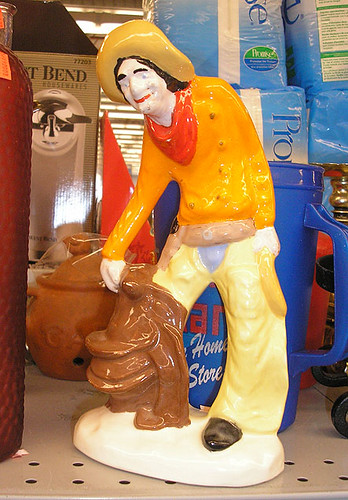 Oh, crappers, he’s got a banana!

That is a banana, right? It’s not a gun, guns aren’t a cheerful yellow. They’re rather less banana-colored than that, more gunny.

“When I’m out on the trails, I make sure I never ride into the sunset without a couple packs of Promise Sanitary Underthings. They make the range that much more comfortable. And since each one bigger’n my horse, I can wrap myself up in them all warm-like on those cold, cold nights. Promise Sanitary Underthings. They’re pretty good, yep. Now, y’all just excuse me while I tie this hunk of leather to my leg. It’s time for someone to saddle up and ride, if you get my meaning.”