Months apart, miles apart, yet there’s something that connects these two. Are they fraternal twins, born to some intensely futile clan, heirs to a somewhat self-destructive and pointless empire, like Luke and Leia, but basically self-defeating? Are they a couple, torn apart by war/tedium/second-rate golf instruction?

You be the judge.

First, the lady, because I understand her more. She’s just having a little trouble with basic motor skills. 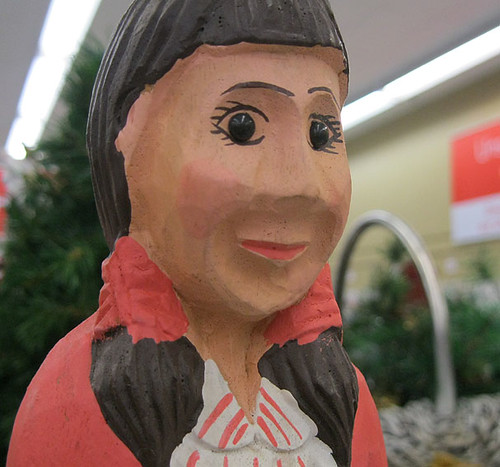 She’s not a bad person really–looks, you know, engaged in the world, attentive, nice hair, obviously spent some time on her make-up this morning. Pity about her golf swing. 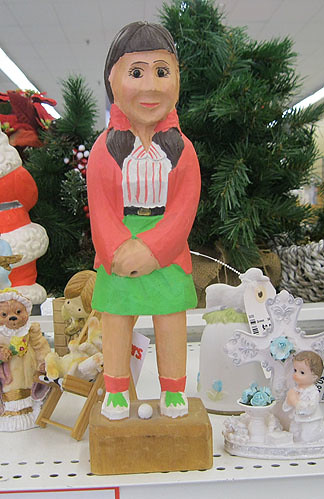 I’m guessing nobody’s had the heart to tell her. “Look,” her golf instructor said, “Your backswing’s great, really. Nice follow-through, excellent form. But you’ve got to use a club.” I guess the lessons didn’t take.

Well…either that, or we’ve laid a very small egg. 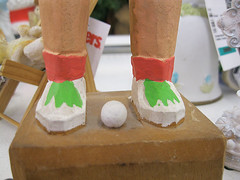 Either one is possible.

Meanwhile, her brother/husband/other-gender alter-ego has bigger problems. I think he may have some serious self-destructive tendencies. We should keep him away from office supplies. 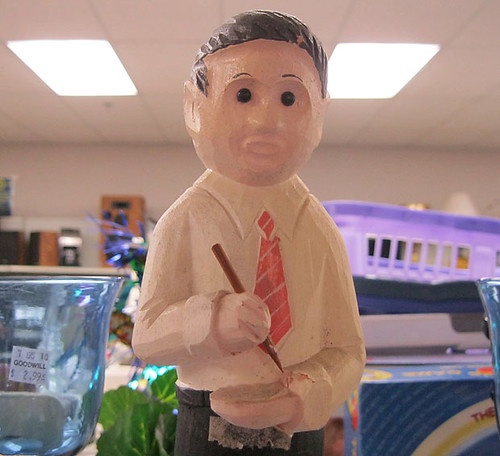 He’s been haunting the Goodwill for months now. I keep telling him, “It’s not that bad! Really! Just take off the tie and live, damn you, LIVE!” But…there’s nothing going on there, just a slow, strangely corporate, death. 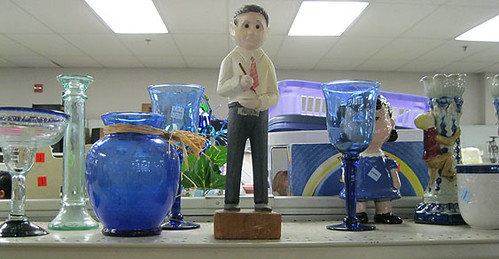 There’s a lot to live for. You could…I don’t know, take up glass-blowing. Or climb a giant candle stick.

These two could get together, though. I’d be like an O.Henry story, he could finally give up his stick, she’d have the world’s shortest golf club, and they could maybe adopt Lucy Van Pelt or something, create a hybrid game of miniature golf and pick-up-sticks that’d sweep the country, make some money, maybe have some kind of relationship. They’ve got so much in common. Creepy, shiny black eyes, for one. Will they ever find each other? Will we ever know? I hope so. 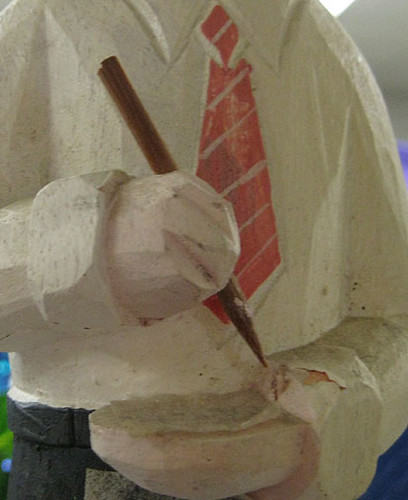 Golfing Futility found at Savers near 2222 and Burnet. Death by Chopstick from Goodwill on 183 and Metric, where he still stands to this very day, sometimes you can hear him weeping.