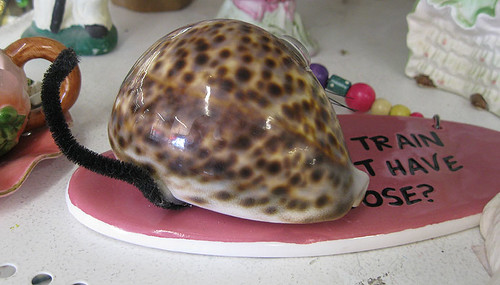 Come on! Don’t be shy! It’s a bright, beautiful day, just like you! Turn around, let’s see your smiling face, little kitten! 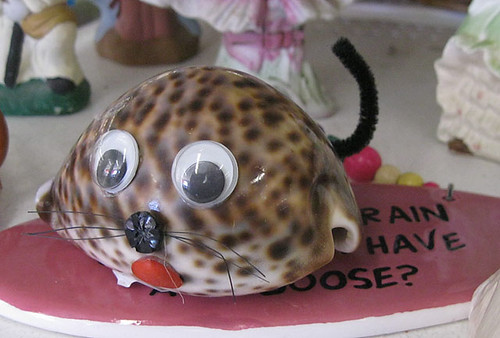 So, what we have here is, well, there’s a certain degree of inspiration. Spotted shell, spotted cat. Brilliant. I can’t see anything wrong with the concept.

Except…except that it calls to mind images of huge cat heads that, independent of their bodies, scuttle around on the ground on crablike legs. When someone brushes them aside they land on their backs, mewing pitifully and rocking from side to side, IF they’re lucky enough to have the extra long tail that reaches the ground. Most aren’t that lucky, end up kicked aside, where they land under the sofa and gather thick balls of dust bunnies, in the vain hope that a fur coat will make them cute enough that they’ll be put back on the display rack.

The weird looking little orange tongue is a nice touch, too. It’s kind of like he’s eating a huge chunk of pumpkin. I’m not sure why someone glued a spider to the poor little thing’s face, though, it didn’t deserve that.

Actually, yes it did. Cowries are horrible little creatures. They probably mug other smaller snails, kick them over, take their lunch money, write rude messages on their shells.

Number two on the Minimal Effort Kitten Parade, and just in time for the holidays–another refugee from Planet Space Cat, where tiny catlings with vast, all-knowing blue eyes STARE INTO YOUR SOUL and EAT YOUR SOULMICE. This one’s a little more sinister-looking than its more benevolent, all-seeing cousin. This one…this one has plans. 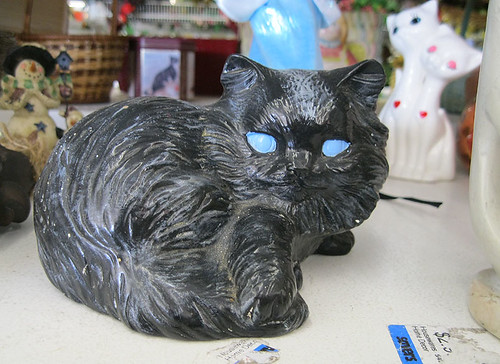 Okay, maybe these plans involve finding some glowing green milk to slowly drink, yawn a tritium yawn, and curling up in a small black ball with two tiny blue moons peering over its tail, but they’re calculating moons that are counting the moments until you turn your back. Then, then…the kitten will probably go to sleep. Really, it’s a kitten, even the most long-term plans they have don’t extend past their whiskers.

Shell Kitten found at Savers on Burnet near 2222, Black Kitten with Blue Eyes…ah…I forget. Its mind control powers are terrifying.