I love you, apple!

Next on our Thrift Land “weird yellow things” hit parade, the world’s biggest, and certainly most suggestive Golden Delicious apple. 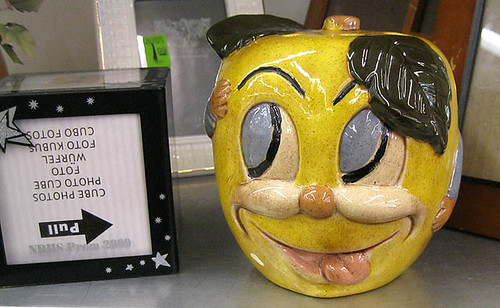 Someone, somewhere, really loves his fruit. And it’s clear that the apple is enjoying itself, too.

We again face the question of artistic intent. Is the man carrying the massive apple? And if so, is he aware that it has a cheerful, somewhat impish face? Perhaps he’s trying to get rid of it. I would. It wouldn’t matter how big the apple was, it’s not going to win any prizes at the state fair if it’s going to lick the judge. Horrible leers and raised eyebrows have got to be disqualifiers.

Maybe it’s not an apple. Not quite. Maybe it’s the head of a massive, pomaceous god, the Jolly Green Giant’s sweeter, rounder half-brother. You know, the fruit. Unless it appears in all its seed-bearing glory as just a giant, appletine head. That kind of sounds like a Japanese yokai, some strange spirit that was created because the Japanese word for “Apple” sounds suspiciously like its word for “bodiless leering horse-sized head.”

My other option is that it was some sort of apple endowed with stubby, tyrannosaurus-like arms. From a certain angle this made more sense– 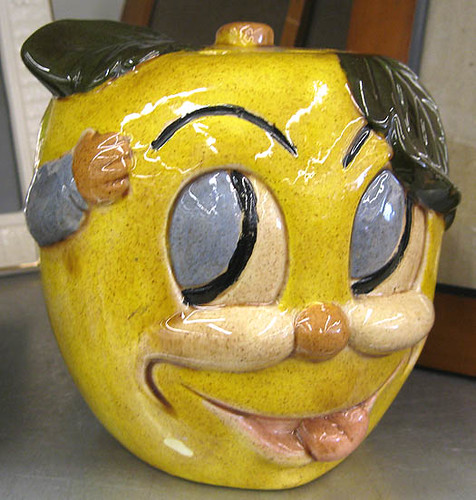 –but this actually raised more questions than answers. Questions I didn’t want to answer. Like, “why would it bother wearing long sleeves,” and “where are its legs,” and “is there any way to get it to flail its arms like a muppet on PCP? Because that would be really beautiful.” But life is full of questions. And giant apples with faces.