I’m not sure what the true meaning of Columbus Day is. It seems to involve lots of discounts at the local auto lots. But I’ve been hoarding some very special pieces to celebrate the occasion.

We’ll start with what must be the single gayest attempt at “American Indian” ever. It’s like Mr. Humphries trying out for a part in Last of the Mohicans. Or maybe some sort of strange camp act, maybe “A Boy Named Sioux.” Seriously! Who accessorizes their rifle? 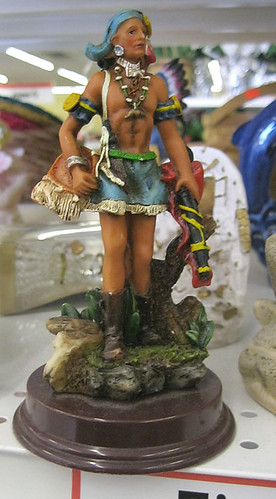 Although he HAS clearly been working out. It hasn’t helped all that much, except maybe on costume night at The Hitching Post perhaps. Could use a little upper arm work, those biceps are a little stringy, but this isn’t about the gift, it’s about the giftwrap. 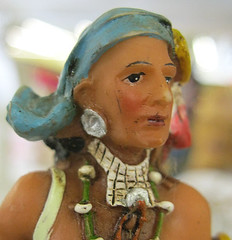 “But do admire the absolutely fabulous headdress and earrings, the former was lifted from a Lawrence of Arabia Broadway production, but with a little bit of color its own mother wouldn’t know it. The earrings? Home Depot, isle seven, assorted nuts, which sounds like either an hors d’oeuvre or my last family reunion. 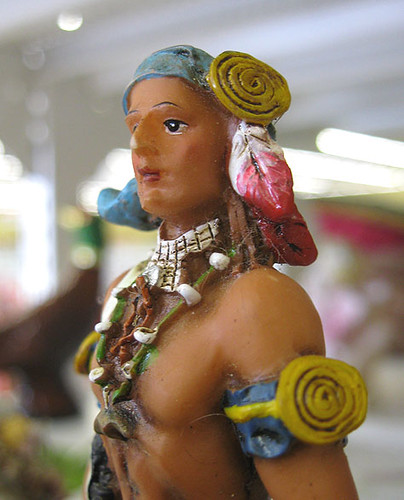 “All of which accents both the Zuni fetish necklace…and the less said about Zuni fetishes, the better, to my mind–and these smashing armbands and matching barrettes. Who says danishes are just for Alderaan princesses anymore? Any princess can wear these! 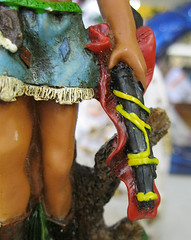 “And take a look at this rifle–no, in my hand, dear. It was, I don’t know, on the dull side a bit, so I spruced it up with some red velvet and gold trimming. Of course I did hot-glue the trigger in place, but, small sacrifices, you know!

“But while you’ve got the camera down there, love, the real show’s off to your left a bit. 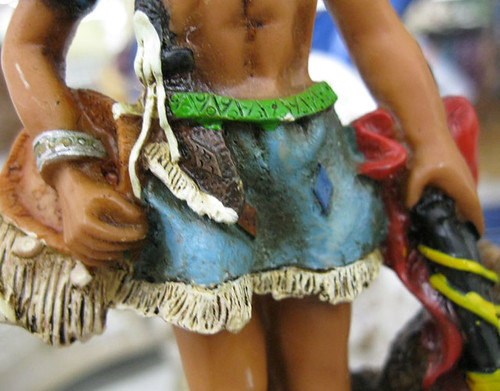 “Pocahantes, eat your heart out. Take one denim skirt, trim it down just a bit, but not too much, don’t want to scare off the missionaries! A couple lovely felt patches, your flint knife, just in case a gentleman has to defend himself–or as near as we might be–add fringe, and, this sort of greenish thing, I think it might have been a snake once, but but of the two of us I think I pull it off quite well. I’d demonstrate but modesty forbids. 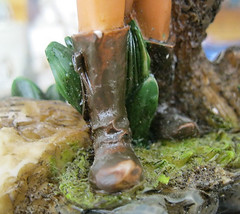 “Still searching for the perfect boots, but these will have to do–if anyone’s looking at your feet, dears, you’ve made some sort of tactical error. Try adding a few more feathers, they draw the eye.” 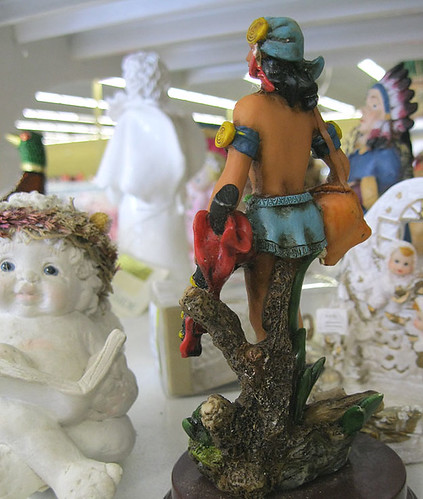 What next…what next…Oh! This poor girl pretty much hits all the important non-PC notes, AND she’s apparently been trepanned. 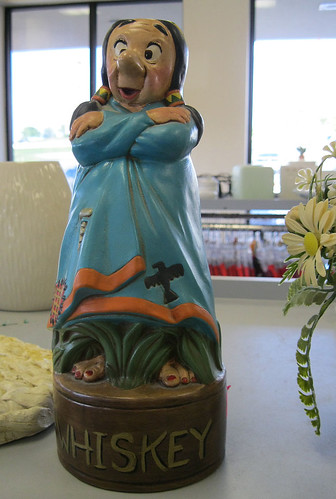 She’s one of a few pieces that I didn’t get around to posting from our San Antonio Road Trip. 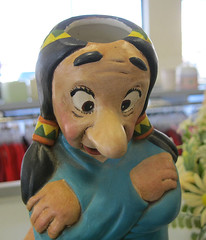 Unfortunately, not a lot of depth to her character. She looks a bit like a kappaÂ from Santa Fe.

(Why is her dress screwed together?)

And then there’s him. 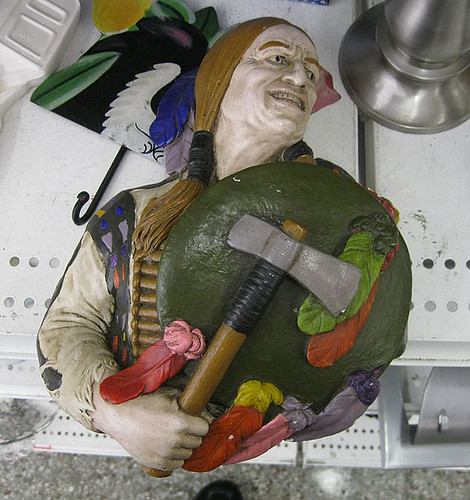 I have to say, I really do live for this kind of moment. The “Dear sweet Jesus, what were they thinking? Was any sort of cognition going on at all? Hello, earth to artist, are we finished having a ‘moment’? Could you please get back to your day job at the asylum for the criminally embarrassing?”

I think this may actually be a sincere effort. It’s hard to tell, because the source material is so…very…bad. We’re clearly operating on some sort of “Noble Savage” base here, one of the standard plaster-cast models painted up by the family for like $8 an hour. But…something went wrong.

How wrong? This wrong. 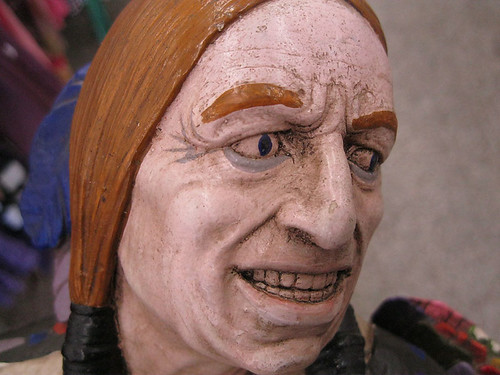 Mmm, flesh-tone eyes, strange cat-like pupils–very blue. Deep, deep wrinkles in “corpse gray.” Blond hair, nice touch, we wouldn’t want anyone to think this was ethnic. It’s about as Native American as a hair band riffing on Cherokee Nation, which was, to be fair, pretty frikking white to begin with. 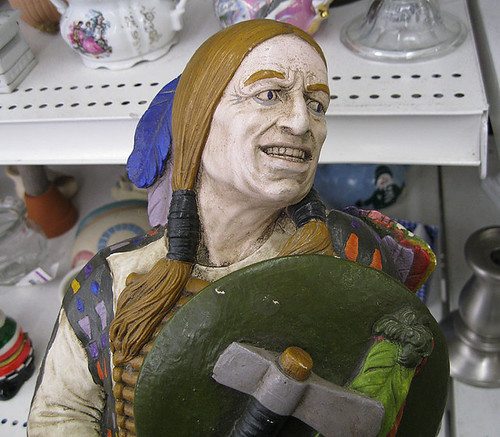 If I could figure out some way to apologize for this, I would. After centuries of indignities and exploitation, so wound into the history of the United States that it’s still a work in process, this makes things, like, .03% sadder. 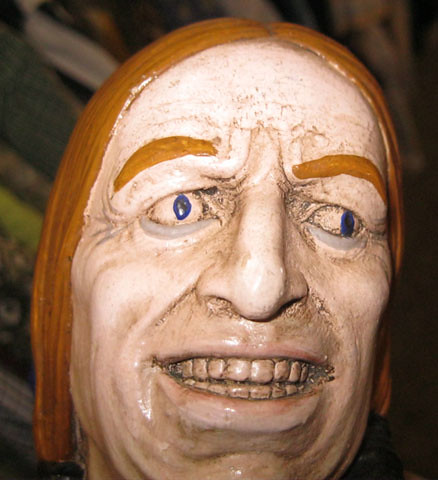 The Gayest Indian Ever and … I don’t know, I don’t have a word for him… from Savers on Burnet in Austin, and the bottle from the decade political correctness forgot from the Goodwill on Heubner, San Antonio.