So long and thanks

So majestic! So joyful! Just seeing them brings me back to my childhood, watching the dolphins frolic through the plaster of paris, painted foam timelessly moored to the “water” around them. They were nothing if not optimistic. Actually, they were nothing if not nailed down, but we can’t hold that against them. 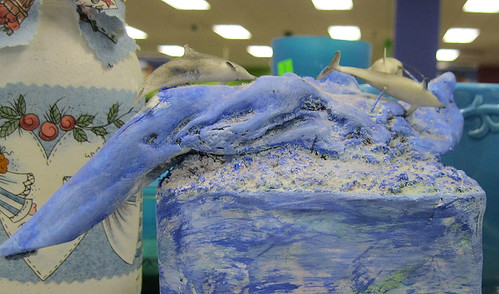 You can almost hear their laughter. And bruised whimpers. The tragedy of a porpoise that improperly tried to frolic through a solid object is one of the saddest sights in nature.

Okay, to be fair, this actually is a pretty exciting little piece–there’s a real sense of motion and drama, from certain angles. From other angles, its little plastic things dancing over what looks more like a deep blue tiramisu, or some gelatinous mass carved from the water, than a seascape. Its perfectly cubical outline does not help, not a bit. From the worst possible angle, it looks like Neptune himself ate waaaay too many Louie-Bloo Otter Pops–Neptune likes him some Otter Pops!–before dealing with an unfortunate blockage. 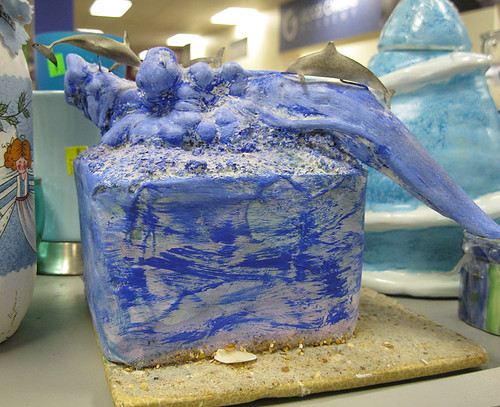 But only from certain angles.

Once again, San Antonio’s thrift community is just flat out amazing. We found a bunch of amazing things–but they scream out for special occasions, like Christmas. Or Columbus Day. I’ve never looked forward to Columbus Day quite as much as I am right this second, particularly when it became “Cultural Misappropriation Day” on my calendar. But that’s neither here nor there. I’ll just say the Goodwill near I10 and Heubner is filled with all sorts of fun junk, and has a perfect blend of low standards and great selection. Heubner Goodwill, I salute you! 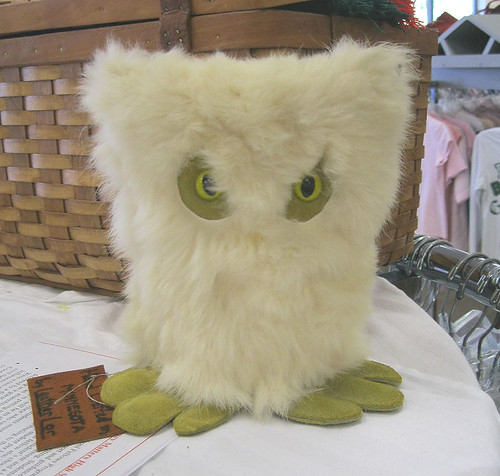 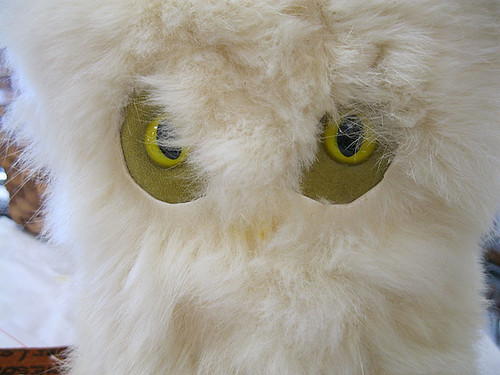 It can also sense shame, vague foreboding, metal fatigue, spare change, and whether you ate too much spicy food. It’s very perceptive.

Actually, this fuzzy little guy has a fair bit of history to him, and known some exciting people. Neat! “Leather Lor” was a leather company in Minnesota in the 1970s, and they made, among other things, strange furry land-owls that stare at you from accusing green eyes. Don’t feed it after midnight. Bad things happen. 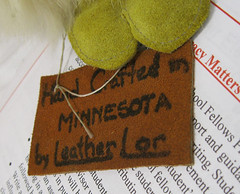 One more Goodwill, then we bade farewell to our thrifting buddies and called it a day. The Goodwill on 410Â turned out to be yet another Â bead in San Antonio’s pearl necklace.