Gaze into the face of pure, undiluted handicraft. 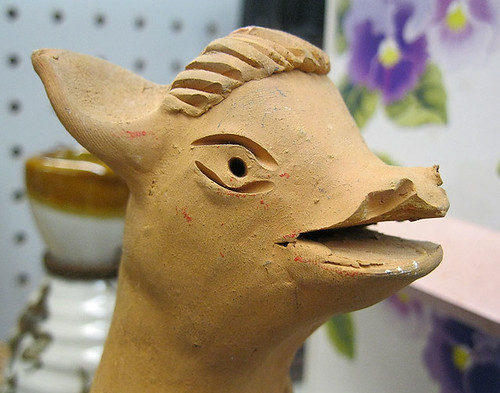 Note how you can see the texture of the artist’s cruel hands as s/he/it moulded this thing into bleating, shambling life–you could almost identify them by thumbprint in the FBI’s national database of ceramics offenders.Â Possibly by the tiny smudges of nail polish, too, I’m not sure where that comes from.Â This is the artist that gave us the cow bell. 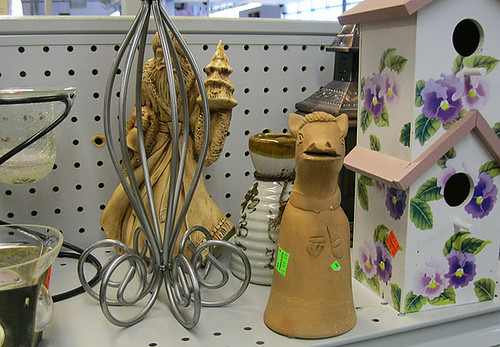 It looks a little surprised. Sort of like a centaur or minotaur, but half-cow, half-handbell. I didn’t actually ring it–I was afraid it might moo, or possibly start crying. It might, possibly, be a horse-bell, but that just doesn’t make any sense at all.

It was nice that the artist gave it a scarf. At least it gets some dignity. 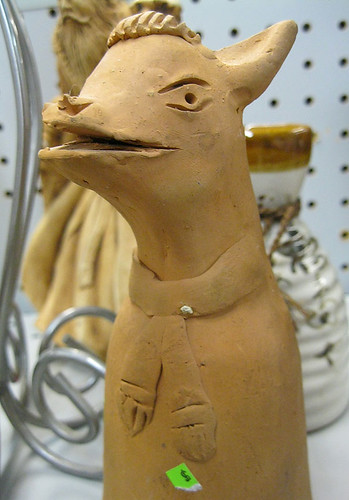 I was most immediately reminded of the mayor of Halloweentown from Nightmare Before Christmas, who was a strange, pinch-lipped and rather bovine creature on his own. But Cowbell has a slightly better hairpiece. His earthenware toupee was shaped by some massive, crude hand with a well-placed fork, an eternally brittle ceramic coiffe. How much of the poor creature’s features can be blamed on kitchenware? His eye seems to be scooped out with a toothpick–probably the nose, too, but one badly-timed sneeze gave the beast a flared nostril that would give W.C. Fields a run for his money. 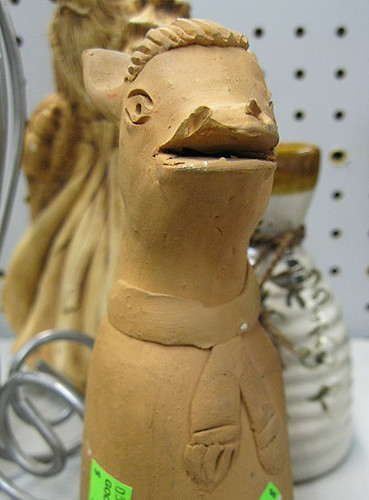 But I can’t imagine that everything about this is the fault of using cutlery to sculpt the poor creature. There must have been some level of malign intent. The face is that of a terorrized ungulate trying to escape…what? By his scarf, and the fact that he stands vertically, we might guess that he’s an intelligent creature–was he once a human? Is this beast like the story of Diana turning the huntsman Acteon into a stag–but better dressed, maybe from New England instead of Greece? Perhaps this is what happens to someone who accidentally catches a glimpse of Martha Stewart bathing.

No, strike that. He’d have better hair.

At any rate, gaze upon what your junior high art class has wrought, and despair, ye mortals.

It’s almost a given that this came from the Goodwill on Metric and 183, Austin. That’s how it shows it cares.