Oh, Texas Thrift Store. You amaze me. I thought, growing up in a town with a dozen vintage stores within a block of each other, I’d seen–really experienced–thrift. You taught me otherwise. You taught me to fear thrift, respect thrift.

This chain is astonishing. Four huge locations, each the size of a grocery store, each filled with…really, the cream of the crap. Everything I’d hope to find–horrible handicrafts, disturbing wall art, inexplicable small appliances, and a few gems. I’m not going to give up the 183 and Research Goodwill’s class ring over it, but maybe I’ll have to apologize afterward, bring it some flowers, you know. 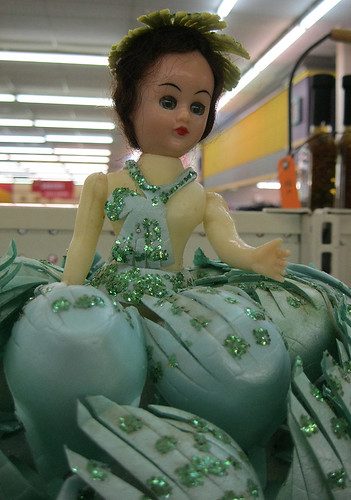 Is this a cultural artifact? I’ve seen a few of her now, mystifying, strangely beautiful ladies, wearing gowns spun from the purest egg carton, delicately festooned with glitter and sequins like they were dancing a spiralling pavanne under magical fairies–incontinent magical fairies. 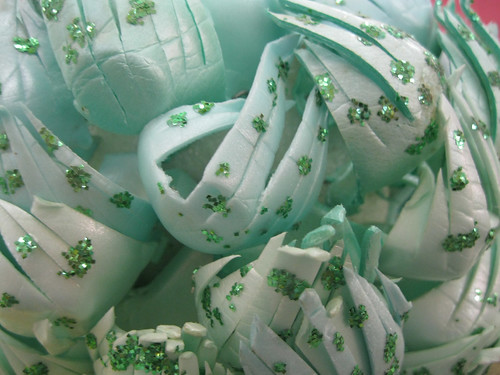 …So beautiful. And yet so strangely like an android. An android wearing several egg cartons, and a crown of pipe cleaners. Were she only life-sized, she could be swept off her feet by a handsome prince, or a really stiff wind. Wheee! 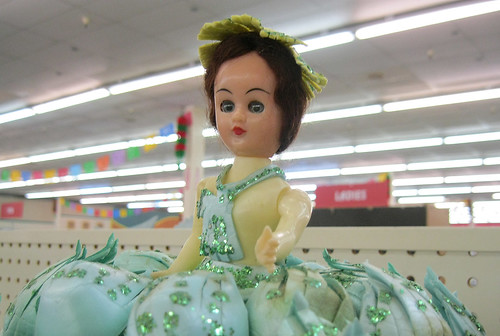 I thought this was for something like a quinceañera, where a young girl gets all dressed up like she never did before and never will again, really comes out like a shining star, but I think this may be a little more like that scene at the end of “The Little Mermaid” where the heroine comes out wearing a dress made out of coral and angry cuttlefish, squawking voicelessly, before she drags her betrothed to her foamy, under-sea lair and endlessly dresses him in squid. Disney really did pretty up the story for the modern audience. 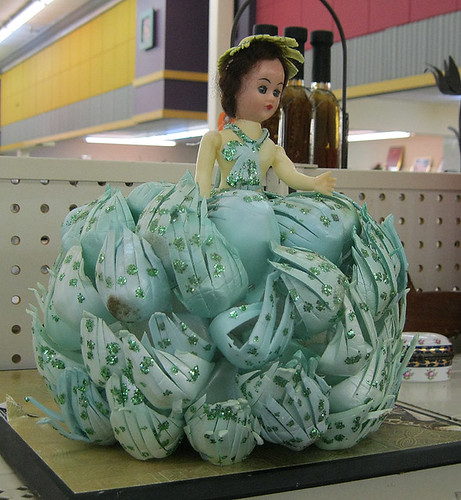 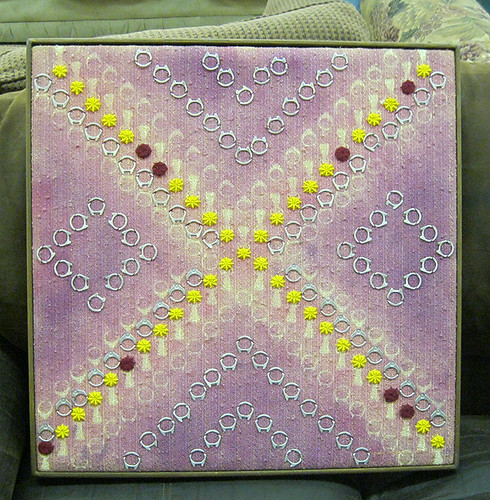 I’m not sure if this could legitimately be called a “horror” or not. But it does seem to hearken back to the holy grail of the bargain bin that is Goodwill–1970s handicrafts. And “Things That Seemed Like Good Ideas After We Had a Few.” The artist, after a quick count, seems to have had about 104. Phantom beer tabs–make that pull tabs, we’ve gone waaay back in our beverage history–form a mandala of used delights, topped by little pats of embroidery floss that look like tiny swirls of mustard from the end of a pâtissière‘s semi-automatic paper cone (sputsputsputsputsput!!)

For some reason, a very few of these are red. Is this a sophisticated statement about race in a postmodern society, or did the artist run out of yellow twine? We may never know. 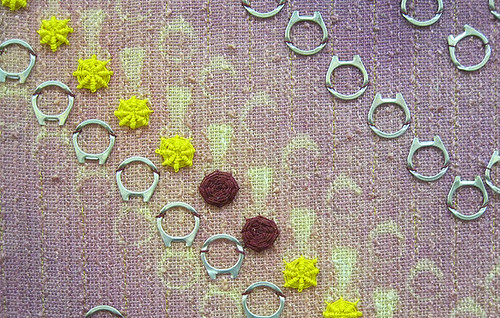 Shortly before we left the Texas Thrift Store on South Flores, we discovered Satan. But he’ll wait until Friday.