It’s for the best

You wouldn’t want them roaming free, would you? Just the LICENSED clowns are bad enough. Maybe not everyone’s old enough to remember the “funny” old days, where you couldn’t walk two blocks without getting offered a cheap jape, drawn up into some sort of complicated mime situation (and believe you me, nothing slows you down on your way to work like an invisible box), or just tripping over a pair of bright red size 38Ls, their owner curled up on the side of the road around a bottle of cheap seltzer in a brown paper bag.

All the same, it does seem a little cruel. Though the little sign over the big metal gates saying “Send in the Clowns” was a nice touch. 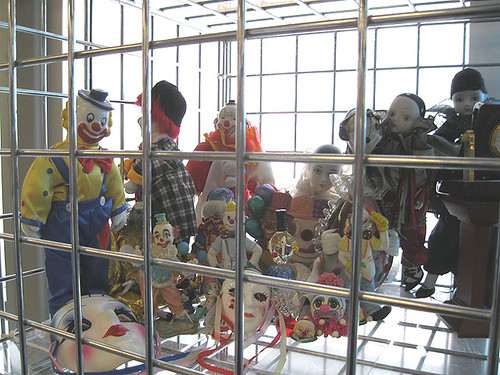 Goodwill, bless their overly optimistic little hearts, has an auction every week. Usually it’s a few rare finds–an interesting over-sized painting, some antique furniture–one time we found an eight-foot beanbag chair, and that was a happy day, oh yes. But the down-at-the-heels GW up the road never gets the good donations–they have to throw things together in lots of collectibles. Nobody could possibly need this many clowns. Not all at once. That’s the FDA’s recommended allowance of greasepaint for like a year. 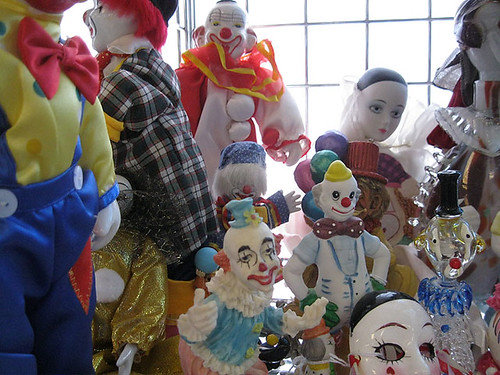 I’ll admit, I’m not really sure what’s going on with the guy at right. He’s kind of like the “Visible Clown” kit mom bought me when I was five, where you can see everything that’s inside a clown. It wasn’t really that interesting, turns out they’re mostly made of twisted-up balloons. But this guy’s just transparent–in a desperate bid for visibility, he splattered two streaks of greasepaint across his face, like runny smears left by a pigeon with impeccable aim.

The fellow at center though, he’s a piece of work. 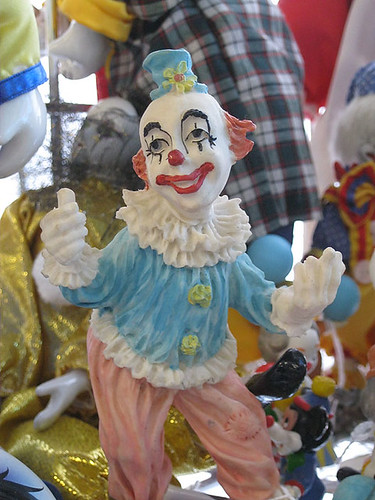 Not every clown responds to “Comedy Camp” in the same way. Some stare out the bars of the gate, passively, desperately waiting to see if all the world really does need a clown. Others descending into tragic cavorting, deliberately making a farce. This one, maybe suffering from a blend of greasepaint fumes and Stockholm syndrome, is clearly trying to buy his way out of captivity with the only asset he has (and I promise, it isn’t comedy). Clearly, the camp does strange things to a clown. Things a clown…just can’t talk about.

Other clowns turn to the release of violence, venting their desperation, fear, anger, on the only targets available–their brother clowns, if there can truly be any brotherhood among these creatures. Here’s the tragic–well, tragicomic–results. 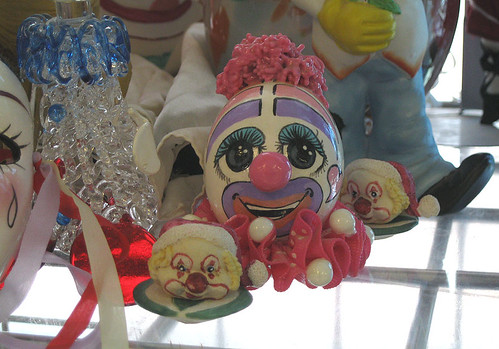 On the plus side, they seem happy about it. 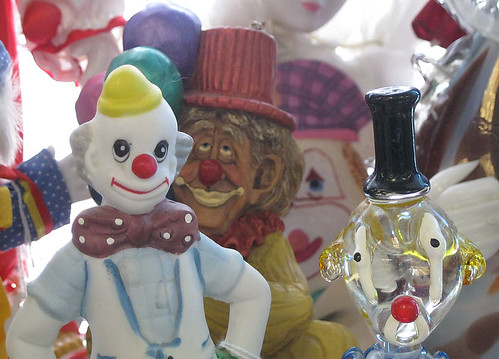 Parents–which one of these would you hire for your children’s birthday? Yeah, the one on the left is a bit more Disney, but they’ve all got their selling points. The guy in the middle, he works really cheap. And the Transparent Clown again…yeah, he’s kind of frightening, but trust me, it’ll be the one birthday your child never, ever forgets. Though they may painfully dredge it up in long, expensive hours of psychotherapy. 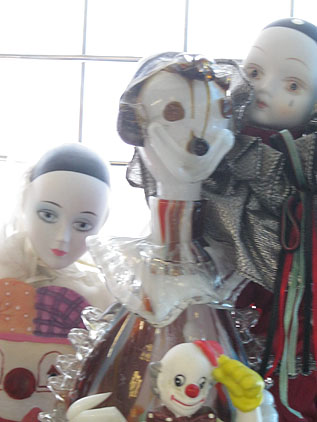 In the end, though, captivity’s for the best. Some of these creatures are just too weird for society.

This truly miraculous find at the Goodwill on I35 and 183, Austin.