When I went to Goodwill and saw THREE leering, staring clown heads, I felt…betrayed? Violated, even? I like to think that I’ve been basically good, that I didn’t deserve this. Nobody deserved this. And that’s really the first of the seven stages of reconciliation with clown. I thought, “Maybe they weren’t clowns.” Maybe they were, I don’t know, furries. Or a new race from Star Trek. 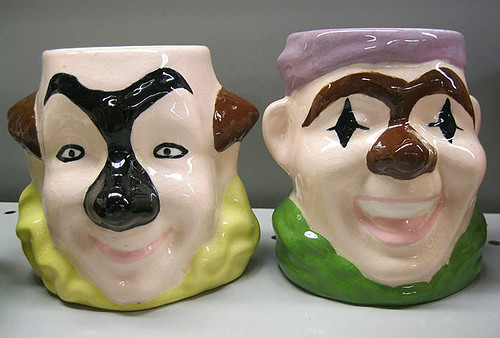 It’s not SO unreasonable. The one on the left could easily be some sort of badger, right? And the other one, well, I’ve definitely seen sillier things on Next Generation. Heck, it’s kind of got Guinan’s hat. But I couldn’t pretend. They were clowns. Maybe strange badger-people clowns, but nevertheless. 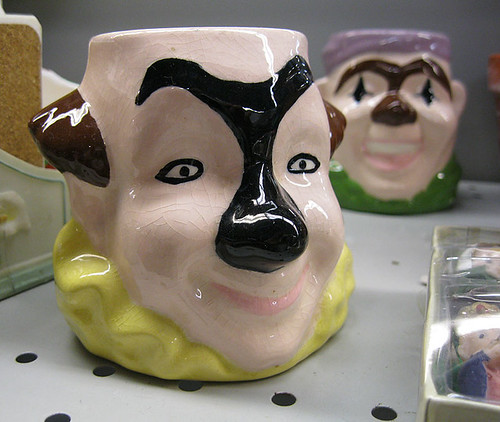 I understand the next few steps are anger and bargaining, and really, I got those over at the same time. I just let the clowns take the “anger” thing, and hoped they wouldn’t hurt me. 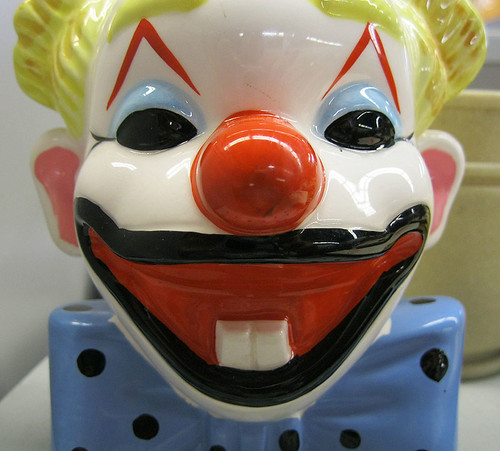 Maybe “confusion” should be one of the stages, too. I often get there when I’m trying to figure out a piece of clown-related art. Is it a planter? A toothbrush holder? The Grail? I don’t know. Why are clown heads so often hollow? I don’t know. Is someone, anywhere, cheered up by this? I DON’T KNOW!! It’s just…clowns… 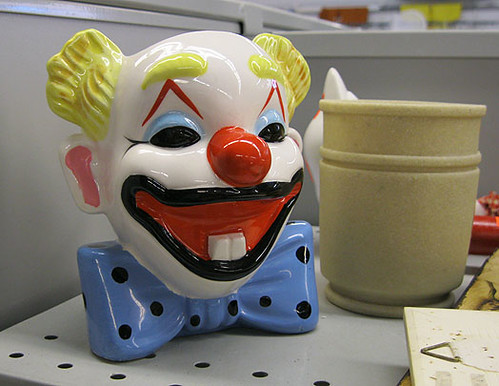 Step five is depression. You can’t help it. You’re in Goodwill, there’s going to be clowns. It’s a fact of life. The employees put them on the shelf. Someone buys them, maybe. Or drops them on the floor. Or maybe they just appear there, in a continuous act of generation that preserves the average density of an infinitely expansive universe. Give up. You can go on to the other shelf, the other aisle, the next thrift store over, you’ll still find…clowns. Why are you so worried about it? The clowns aren’t. The clowns are…happy. 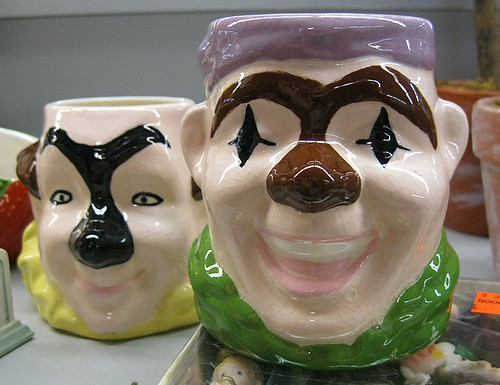 And then I gave up, and ended up buying a stack of 67 orange beverage coasters so the employees would stop staring at me. But the clowns are still staring.

Both miraculously found on the same unpleasant day, Goodwill on 183 and I35, Austin. And yet, still we go back.

One Response to “Double-header”