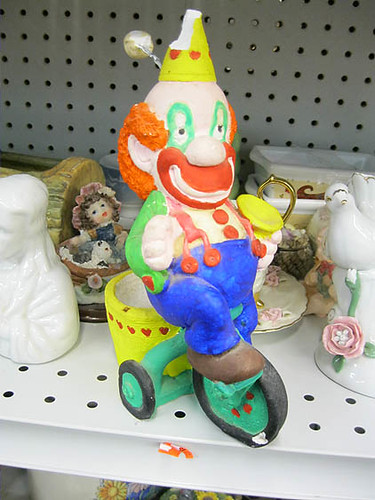 I can’t shake that this guy reminds me of Homer Simpson, with an even more unearthly color scheme. No, I did not ratchet up the saturation on my camera–he really is that color. The bike? Also that color. The only time I’ve seen a face covered in that much lurid red was on a picture of a hyena after lunch. It, also, was happy. And on a tricycle, go figure. 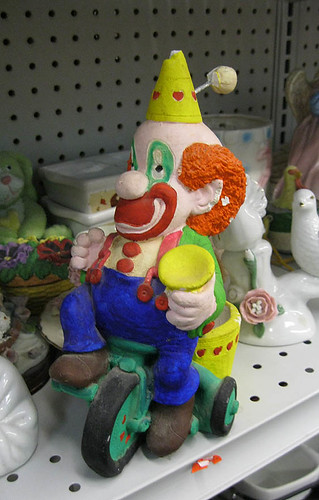 If anybody’s got an idea what the weird little antenna on his head is supposed to be, I’m listening. Has the government been investing in remote-control clowns? I was wondering where my tax dollars were going. I expected something more high-tech. More “Stealth Bomber,” less “Bozo.”

I’m guessing the border patrol and enemy encampment wouldn’t even check to see if he’s dragging secrets or explosives or whatever in his little bucket. “No…you, just…keep going. Don’t stop. Please. Go on by. I don’t WANT to know.” 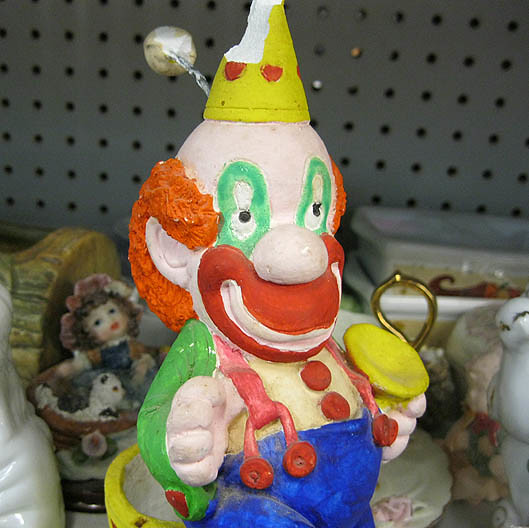 Leave it to the professionals, seriously.

This next bit of DIY Clownery actually isn’t that bad–it was an unambitious paint job, really, they weren’t reaching beyond the standard color palette into realms of Lovecraftian madness. 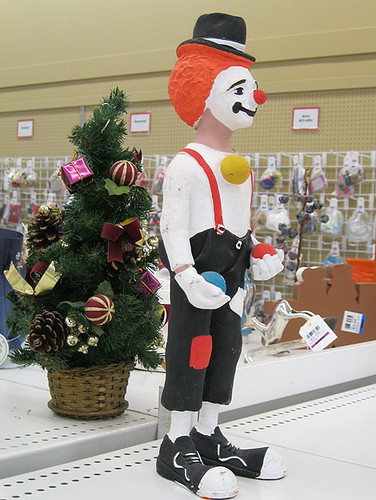 Really pretty tame, I’m actually kind of liking the cool shoes, and the actual legitimate human skin tone under the white face paint is a nice touch. The only place where I’d point and stare is that his hair’s forming some sort of strange mesa or plateau for him to rest his hat on, but that’s being fussy for its own sake.

Except…except for the strange growth. 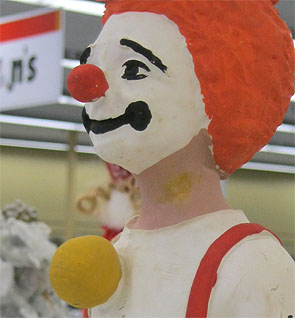 What you didn’t know about clowns? They reproduce through budding–explosive parthenogenesis. Every six to eight weeks they form a small, colorful nodule that eventually they release like a drifting spore, a precious gift to the world. These airborne children float like wisps of cotton candy on the air, distributing the clown through its natural habitat, until they eventually rest on a street corner, eventually blooming into a full-sized mime, harlequin, Scaramouch, or merryandrew.

Shockingly bright tricyclist from Goodwill on Parmer near I35; a budding juggler from Savers on South Lamar, Austin.

2 Responses to “Adventures in DIY Foolery”