Off the Coast of Brick-a-Brack 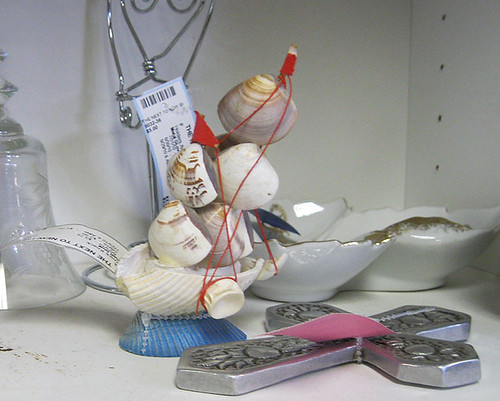 “Captain, the crew’s talking among themselves, they say that no good’ll come from this voyage. They’re saying the ship’s a’cursed.”

“Belay that kind of prattle. The HMS Conchiolin is the prettiest ship on these eastern seas. T’ain’t no ship as charming as she. Why the day she first set sailed, they said, ‘That’s a right lovely boat there.'”

“Nossir, they said, ‘Damn it all, get the ropes and a team of horses, she’s sunk straight to the bottom of the harbor.’ Then, begging your pardon, they said some unkind things about your mother, may she rest in peace.”

“May she rest in peace.”

“Yessir. Mostly, they said there were reasons that no god-fearing man would build a ship out of shells, sir. Even really big ones.”

“So I’ve heard. From the mob, from the broadsheets, even from the flower girls. Hells, the parrot’s saying it now. But there’s more to sailing than a stout hull, good sails, a functional rudder, and a deck.”

“If the spirit’s made of clams, I’d say we’re golden!”

“Stout fellow. We set sail at noon. Once we’ve finished dredging out the crew’s cabin.”

“Nossir. Ain’t got one of them, neither.”