After the magnificence that was the South Flores Texas Thrift Store, we knew that anything else would be a pale second. Out of a sense of duty, we went down the other, lesser thrift stores on South Flores, taking a detour down Military Drive because South San Antonio is kind of like the Bermuda Triangle, navigationally speaking. We found this little guy at the Sally on Southwest Military Drive. Won’t you take him in? He’s looking for a good home. 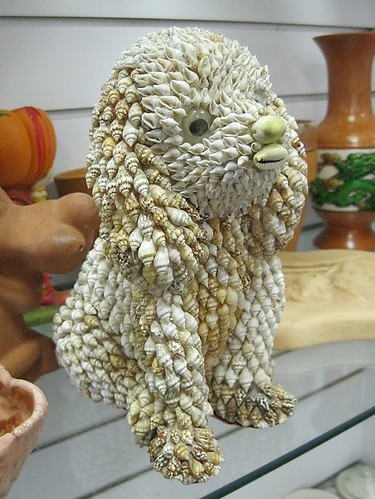 Previously, I’d have thought that you couldn’t screw up a puppy dog, but shell art changes the impossible to the inevitable. Shells cascade down his ear like a river of tiny, friendly worms, and the skin around his eye isn’t covered with a down of fur, so much as a jagged, pale, serrated parody of hair. Don’t pet him, you’ll only hurt yourself. And that’ll hurt you, and blood everywhere, and it ends up just like that last trip to Thrift Land, we can’t take you anywhere anymore.

Points to the artist for clever use of cowrie shells as lips. It didn’t work, but I do applaud the effort. 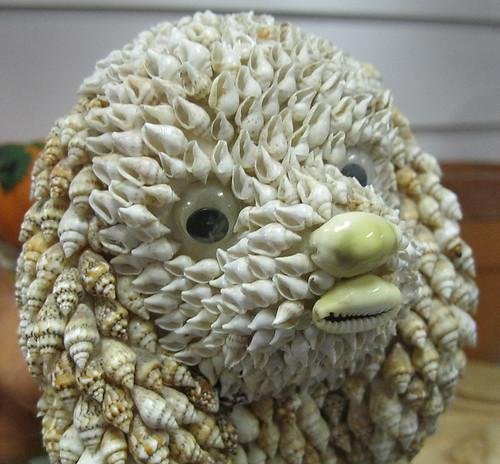 Teeth like a dainty shark. Well, I’m in love. How much IS that puppy in the window? The one with the serrated jaw?

Okay, here’s the plan. Me and Scoob here will distract him. Velma, you knock the hideous shell dog off the shelf with that giant pumpkin. Let’s go, gang! 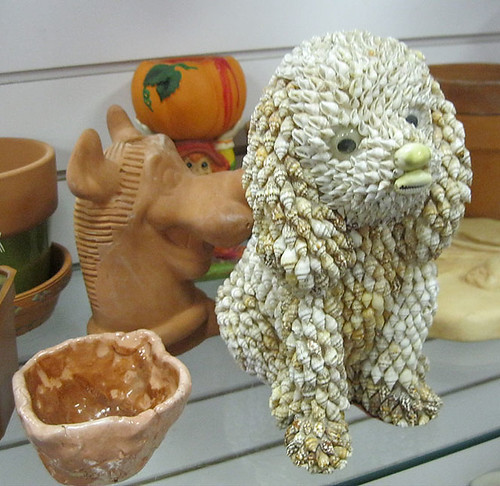 …Several confused left turns later, we had navigated out of the gravity well that mysteriously surrounded Southwest Military, and found our next destination–Community Thrift on Southeast Military. Truly a magical wonderland! This MUST be a re-furbished Home Depot, Sams, or some other Big Box store, but they’ve turned it into a hunter’s paradise. Not everybody was as impressed with it as I was, though. 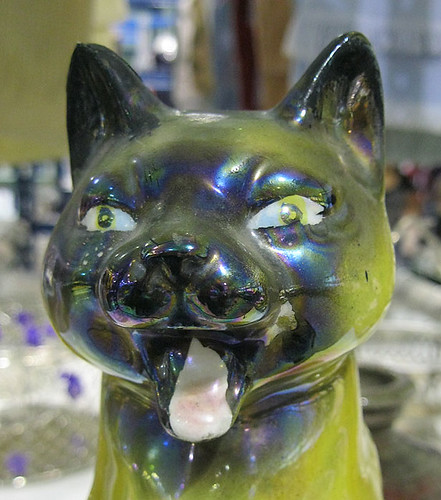 Displeased cat is displeased. However, if you bathed yourself with your tongue (and who doesn’t?) and someone shellacked you with a heavy gloss of irridescent black and yellow paint, you’d probably cop a bit of an attitude yourself. Kind of like Bill the Cat. 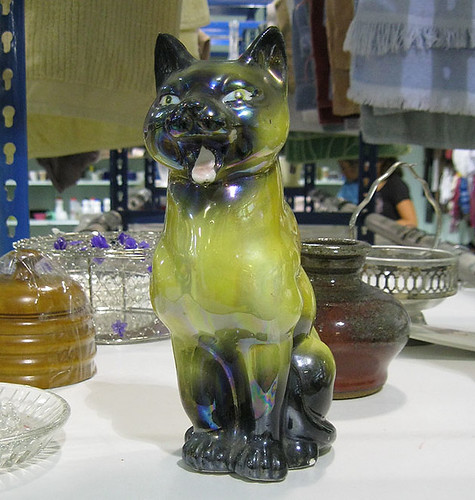 The heavily-painted, faintly disgusted cat was only the guardian, the sphinx at the entrance to the valley. Beyond him–her–it–a full aisle of brik-a-brak. It was…beautiful. I had come home.