If somehow you haven’t quite had enough of International Clown Week (as expressed through the medium of bargain-bin brik-a-brak), do stop and visit Thrift Madness, where mental dedicated thrift gnomes have spent untold hours scrounging up an entire department of clowny badness. There’s some really “great” finds there!

If, on the other hand, you’ve had enough hilarity, we’ll wrap this up with, well, more clowns. 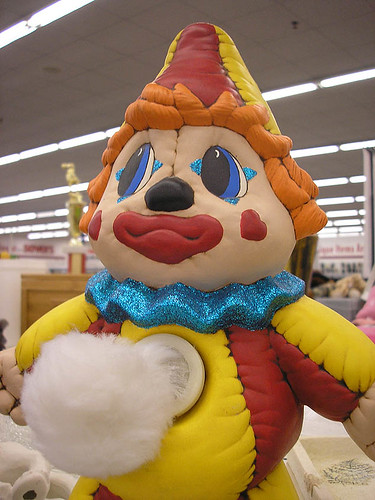 Imagine someone out there really needed a clown, but they only had ten pounds of pre-chewed gum, some tempera paint, and a cotton ball. The big flaw is, of course, “why did they need a clown?” But that’s why you have to use your imagination. So anyway, they fused the poor, misbegotten thing out of wads of gum, hastily shoved together into a somewhat anthropomorphic lump, and painted it with whatever thick, pasty pigment–let’s say, sparkly blue, and a nice thick pink base–would stick to wet chewing gum. Then, like the final drop of ink that brings a crane to life, they glued that cotton ball down. It’s not moving. I think it’s stuck on with some sort of tack.

Call it a clown, go home. 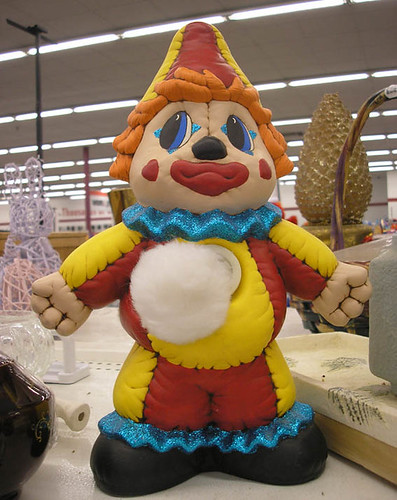 I like the black button nose. If it’s cold and moist, you know it’s healthy. 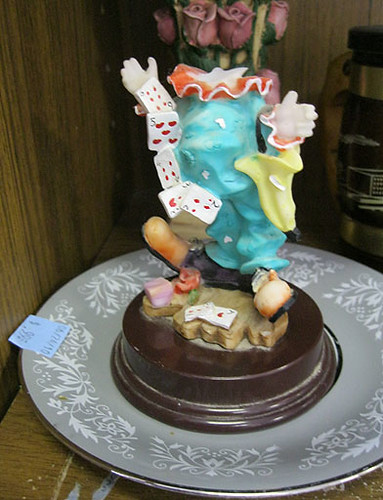 Sadly, all things–even International Clown Week–must come to an end. Here, they came to a very sudden end. The real tragedy is that–before the accident, or the spinning Indiana Jones and the Funhouse of Doom death trap, or possibly before his head turned into a huge bouquet of roses, with a merry popping sound and a sudden blast of cheap floral perfume–he had a winning hand. A straight flush, what are the odds?

Poor little guy. But if it’s any consolation, he died the way he lived–brightly colored, kind of sad, and we weren’t really sure if we should be laughing or not.

Next week, we return to your regularly scheduled monstrosities :)

Lump clown at Savers on South Lamar near 290, Headless the Clown from Salvation Army near 620, Austin