A Celebration of Clowns

Let’s get into the spirit of this thing! 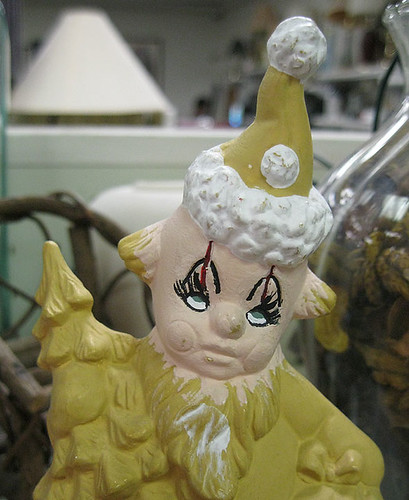 So, clowns. They’re not really funny. This is an observation with all the revelatory power of someone telling Wile E. Coyote “That looked like it hurt.” But I think this little guy may be the poster buffoon for the sentiment.

We’re starting with a nice base coat of that uniquely foul yellow you only get by dipping something in the 60’s. That’s a GREAT start. I’m assuming this was originally a white plaster DIY Christmas Clown, but we don’t have no Christmas Spirit. The green of the tree? Baby crap yellow. The whimsical tufts of hair? Baby crap yellow. AND flesh-tone. Joy. More like horns shoved out of his temples than whimsical sideburns. The hat? Baby crap yellow, but at least there’s a little white poof to say “Merry whatever. Like I give a plum pudding.”

And…about that hat…I’m pretty sure it was stapled to the poor guy’s face and then dragged s-l-o-w-l-y up his brow. But in all fairness, he doesn’t really care. It’s just one more indignity after a seagull took a poop on his neck ruff.

I really like the little circles of his cheeks. “Paint them red and I swear, you’re taking this Christmas Tree antibranchwise.” 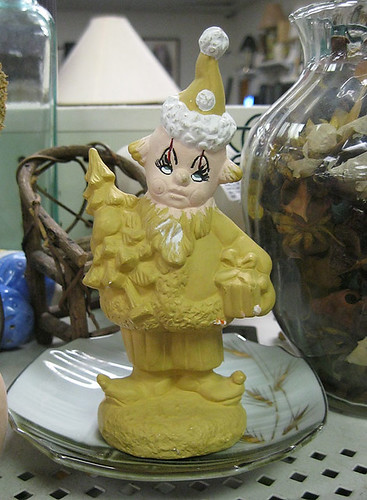 Merry Christmas. Happy National Clown Week. You do NOT want what I’ve got in this box. Trust me, I’ll be the only person laughing when you open it. But I’ll bet you my painfully-attached cap that it’s baby crap yellow.

Goodwill near 620 on Research, Austin