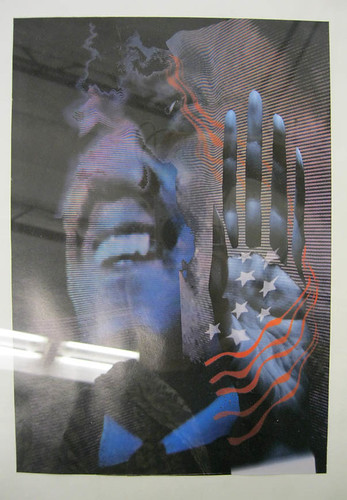 On the plus side, I’m pretty sure this isn’t Obama. Not 100%, but like 70%. If it WAS Obama, I could start to deconstruct this properly. As it is, I do not know. The image did not come with an answer key, even if you tried to read it upside down.

So, free-associate with me. Are you seeing the Twin Towers and 9/11? Maybe. The image swirls off into whorls of nothing, like smoke rising from a disaster. The verticality of the fingers lends a tower-like aspect, but it’s NOT a building, but a guy with a big toothy smile, and terrorists have just flown two planes into his coiffure. So, that may just throw the tower idea out the window.

Then there’s the hand. His hand? A universal hand? A hand raised in patriotic fervor, willing to take a pledge to better the United States? A hand melting out of the haunting regularity of…uh…maybe a TV screen…holding patriotism in its palm like tinsel. The MEDIA! This is about the media, who are…on fire! No, no, that’s not it.

Um. I’ve got it. The NOTHING is coming to devour all of Fantasia, starting with its cheerfully insincere senator. And Atreyu has been sent to find a human child to make an unbiased vote so that President Moonchild can successfully pass an energy bill.

Really sorry about the image quality in this photograph, but there’s only so much Adobe Photoshop can do, and clearly, it’s done enough today.