Just chillin’ with my plushies 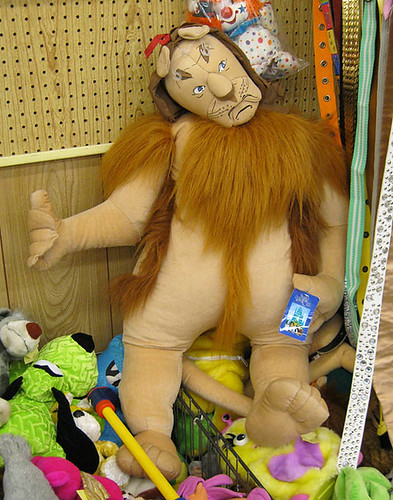 I’ve watched the Wizard of Ozsubstantially more than once. I read the book a few times, and the Cowardly Lion has never struck me as particularly “gangster.” Even if you catch The Wiz, where the action starts in Harlem, the Emerald City is superimposed over the Big Apple, the lion appears outside a library, breaking free from a big concrete lion to menace the travellers. So…street, no. Mean, possibly, cowardly, definitely. Gangster? No sir.

But he can’t help trying. 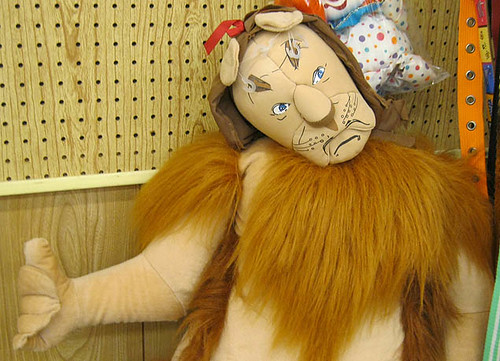 It’s actually IMPOSSIBLE to look street when you’re sitting in a big pile of stuffed animals. Scientific tests have been done. Very respected members of the rap community, urban luminaries, were asked to hang, or possibly chill, while nestling ET-style in a pile of stuffed bunnies and amiable teddy bears. Results showed a startling loss of over 75% of street credibility, and most subjects experienced a strong desire to bury themselves further in the pile while making happy burbling noises.

It’s also VERY hard to display any real attitude or adopt an urban posture while being naked in a thrift store, or, alternatively, dressed in a lion costume. Can’t be done.

But we forgive him for trying.

Lion: “You don’t have any courage for me in that bag, do you?”
Wizard: “Many men, and indeed, some lions,Â go forth into the world with little more courage than you do. But they DO have street cred. Therefore, by the authority vested in me by the Street and Urban Development Society of Oz, or ‘SUDSO,’ I give you this bling.”
Hangs a large gold “OZ” logo around Lion’s neck.
Lion: “Shucks, folks, I’m speechless.”

Somewhere over the rainbow, Stassney and Manchaca, Austin