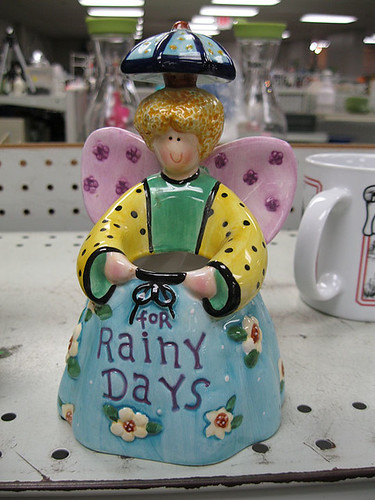 I really do think the overall quality of the heavenly host is slipping. Something about them seems tawdry, I don’t know what it is. It MIGHT be that they’re wearing Umbrella Hats, which weren’t really all that funny even in theÂ 90’s when you could get a Sinbad movie greenlighted.Â

No, it’s probably the way she’s holding her dress open for allÂ takers, with a big “Come and GET it!” sign on there.

Unless she’s actually found a way to KEEP rainy days up her skirts. That would be impressive. And probably hygienic. Â

The world of whimsical ceramic miniatures really has its work cut out for it in terms of audience suspension of disbelief. On the one hand, I might imagine that this was a small and whimsical novelty with no existence other than as a receptacle for spare change, despite its obviously anthropomorphic–angelopomorphic?–design.

On the other hand, I might imagine that this was a life-sized Seraphim hanging out on the celestial street corner with a sign saying “Bored? Sample the goods. They are QUITE wholesome.”

Seriously, gift designers, think of your audience! Give me clear guidelines for interpreting your creations, so I might appreciate them as they were intended! This one’s just kind of creeping me out. Plus, I think the Raggedy Andy miniature on the next shelf was getting ideas.

Goodwill on Metric and 183, Austin. The only Goodwill that sounds like Barry White when it sings.