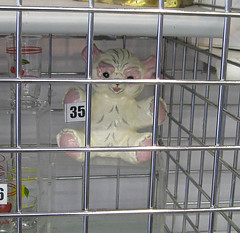 I don’t know how widespread the institution of DIY Craft Studios is. I’d hope that it remained in the South, home of all things tacky. These are the studios where the walls are lined with six or eight identical Dora the Explorers, waiting for you to lovingly apply your own paint and spend $9/hour for the privilege. Not a BAD institution, it’s a nice way for a family to get together and share in the general concept of arting.

Sometimes, though, mom and dad insist their high school son comes along–the one that they have to drag out of his crammed, adolescent boy-scented sty of a bedroom, bombarded by complaints. And it’s a damned good thing they did, posting a pic like this is a hell of a lot easier than actually writing something.

But I think Mr. Devilbear is actually a sincere work of crafting. Something just went dreadfully wrong. 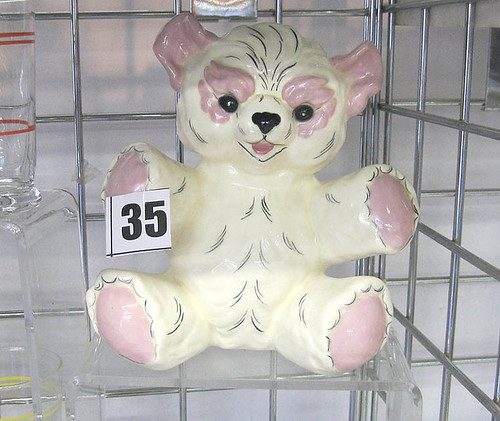 …but the little things, they added up. Like a widow’s peak. I don’t care how pink you make it, giving a perfectly innocent bear a hairdo that screams “Drag Queen Dracula at the Senior Center” does NOT make it endearing or charming. And let’s discuss the eyes. Are they strange birdlike growths of feathers? The telltale markings of a budding luchador? Not a clue. Overall the effect is not so much “Bear need love, give hug?” but “Bear need blood, Gragrggharr!”

Again, it’s a good thing that he’s behind bars.

Odd thing on this one–despite being a horrid little lump of home-brew inspiration that you couldn’t get $2.99 for, this scary little bugger was in the auction cage, where USUALLY they shove the stuff that’s special and unusual. I’ll grant, it’s unusual. Maybe they plan to blackmail the artist to jack up the bidding. 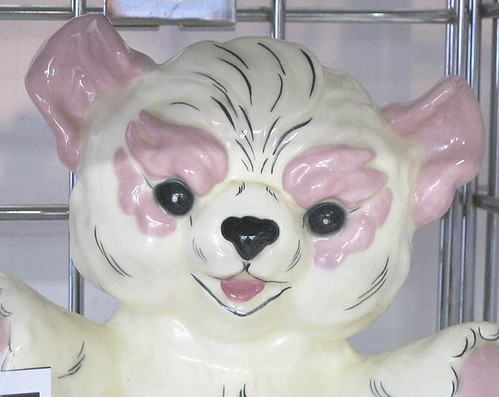 This next guy is a sincere attempt at hand-crafted artwork, I don’t doubt that. Or, a poster child of Redneck Science gone Horribly, Fatally Wrong. 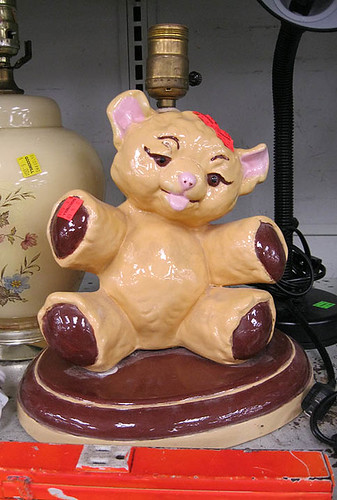 If you listen closely, you can here him. “Please,” he says. “Test the lamp. Plug it in and finish the job.”

Or not. Maybe after a couple of rounds of bargain basement electroshock therapy, maybe the world’s looking pretty good, and all he needs is a sweet, sweet jolt of the old power strip. Alternating current takes the pain away. 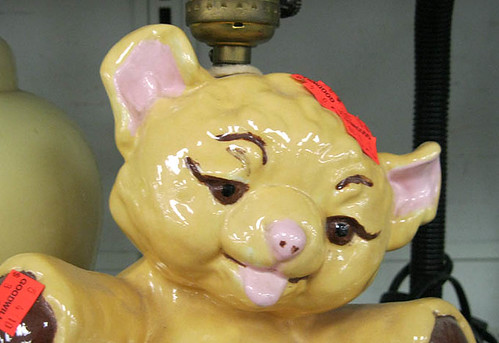 Poor guy! But then, I’m not sure be that much better off if someone replaced my spinal column with a lamp-stand.

Heh. You have to excuse the drool, he got a little pithed last night. 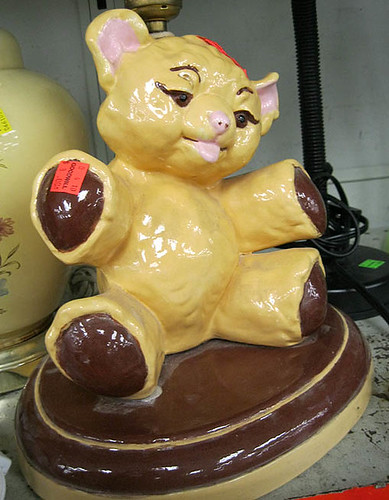