Sometimes, you just have to throw your hands in the air and say, “I don’t know. If it’s not neon pizza, I have no idea.” 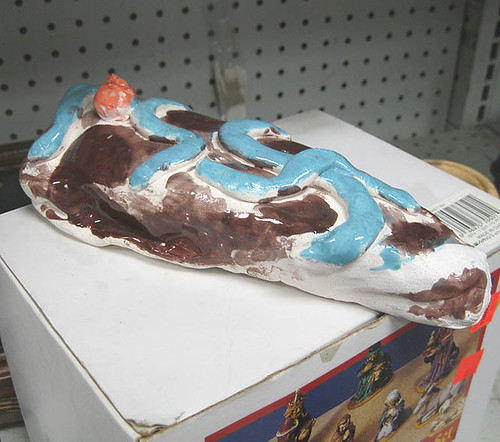 This is one of those times, though certainly not the onlyone of those times. The next time you have to pick the toppings for the office pizza party, answer with confidence, “gummi worms, chocolate syrup, and a single robin’s heart.” Sort of a Salvador Dali, Yoko Ono special. If you have your doubts, just ask for robin’s hearts on half. They’re not everybody’s favorite. 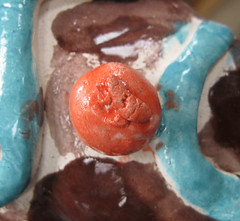 I’ve looked at this one from several different angles, and none of them make sense. From one angle, it looks a bit like some sort of strange allegory for the fall of Nazi Germany. From another angle, a ceramic tribute to victory over the Smallpox virus. From a third, weltschmerz.

The round thing…it’s important somehow. It brings it from the realm of the strange to the strangely organic. Like a tiny pomegranate lost in the small intestines during a radium treatment, or something you really don’t want to see on a CAT scan. “I’m sorry, it’s bad news…you have a squiggly blue ceramic pizza in your corpus callosum. It’s inoperable. We’ll have to put it on clearance and hope for the best.”

…As for this second piece, my world can easily handle squiggly blue biohazard pizzas, but this is frankly noneuclidian arts and crafts at their most suspect. 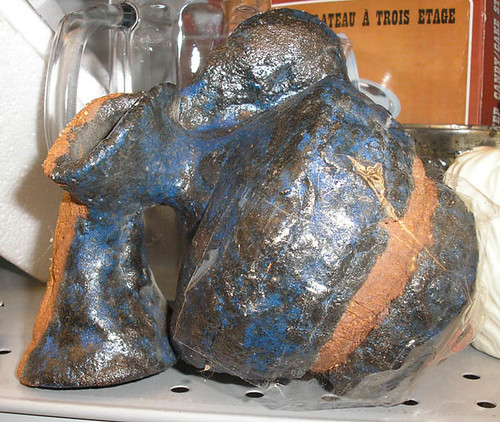 This MAY be the world’s oldest artificial heart. If that was the case, they could have marked the price a bit higher. 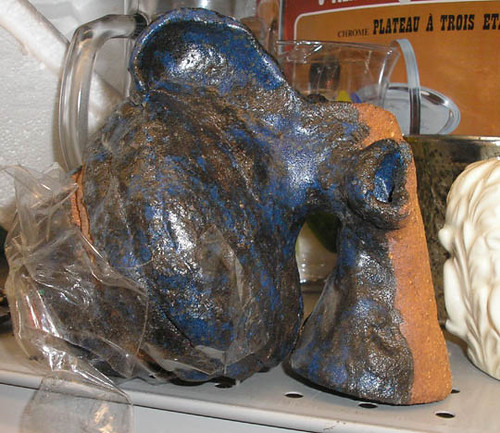 If a five-year-old tried to make a clay bagpipe, but only after having an ADHD moment whilest sculpting Howard the Duck, you just mightend up with this charming little blasphemy. And even though mom said that it was special and YOU were special–and you were special!–she still gave it to Goodwill. Probably took a good tax write-off for it, too. Your artistic passion, her $10 deductible. Be proud.

If this was soft and rubber and made a honking sound, it would be the best toy ever. As it is, a sad moment of ceramic futility. Pity it, oh whimsy that could have been.